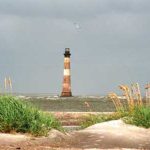 Coastlend Mortgage’s owner loves the low country and the rich history it offers. One place of near and dear to the his heart is the Morris Island Lighthouse. It represents 300 years of Charleston history. Coastlend Mortgage wants to continue the Morris Island Lighthouse’s legacy of guiding people home by donating $100 to the Save the Light campaign for every loan transaction closed . In an effort to continue its life for generations to come.

Morris Island lighthouse stands all alone about 300 yards off shore from the island of Folly Beach. It can be viewed from the northeast end of Folly Island and from the bridge coming on to Folly Beach.

The Morris Island lighthouse is now completely surrounded by water but was once sitting on a good sized island with numerous buildings around it. The lighthouse was completed in 1876 and was the second lighthouse to be built on the island.

In the 1700s there were three islands that stretched for four miles between Folly Island and Sullivan’s Island. They were named Middle Bay Island, Morrison Island, and Cummings Point. The first Charleston lighthouse was built on Middle Bay Island in 1767. The lighthouse was designed by Samuel Cardy and built by Adam Miller and Thomas Young. The tower was cylindrical and stood 102 feet tall. The lantern room had a revolving lamp that had a range of about 12 miles. In 1858 a Fresnel lens was installed.

In the early 1800s the channel leading to Charleston began to shift causing a change in the tidal currents. Sand began to build up between the islands and this resulted in the three islands merging into a single island. Since Morrison Island was the central of the three earlier islands, the now single island was called Morrison Island. Later the name was shortened to Morris Island.

The first Charleston lighthouse continued to provide service up to the Civil War. In 1861 the fleeing Confederate soldiers blew up the lighthouse so northern troops could not use it. 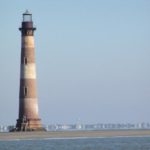 Following the civil war, in 1873, Congress appropriated money for the rebuilding of the Morris Island Lighthouse (then referred to as the Charleston Main Light). The lighthouse was completed in 1876 approximately 400 yards from the earlier tower. It stood 161 feet tall and was patterned after the Bodie Light of the Outer Banks in North Carolina. It even used the same paint scheme as a day mark – black and white horizontal stripes. There were a total of 15 buildings on the island besides the lighthouse tower. Included in these were the keeper’s quarters, various outbuildings, and a one-room schoolhouse (the school teacher came over from the mainland on Monday, taught the children during the week and returned to the mainland on Friday).

Toward the end of the 1800s the channel had again shifted, but this time the change threatened the Charleston Harbor. In order to keep the channel open several jetties had to be built. These were completed in 1889. Although the channel into Charleston was saved, the changing tidal currents resulting from the jetties caused severe erosion on Morris Island. The island began to shrink. By 1938 many of the buildings were destroyed and others moved. The light was automated in 1938 and the Fresnel lens was removed.

Since 1938 over 1600 feet of land surrounding the tower has been lost. Today it stands alone, completely surrounded by water. In 1962 the Sullivan’s Island lighthouse was built to replace the Morris Island Light, which was decommissioned. The U.S. Coast Guard had plans to demolish the tower but petitions from local residents saved the structure. The Coast Guard built an underground steel wall around the tower to protect it from further erosion damage. The lighthouse is now privately owned and efforts are underway to preserve the Morris Island Light.